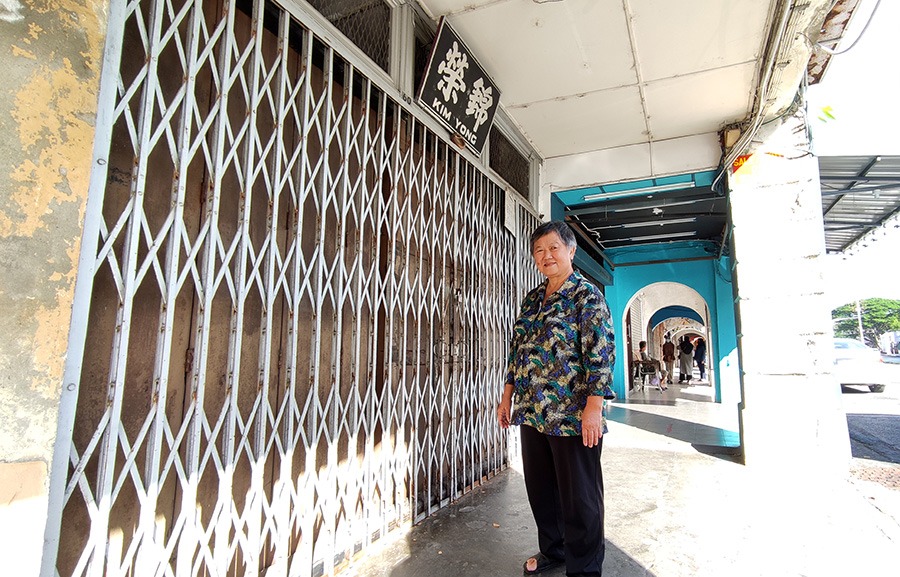 Having grown up at the Old Bazaar, Kueh Geok Boi is fairly well known in Kuching. You may not have met her, but you probably would have had a taste of the kueh teow that is manufactured by her family, BB Trading. Her footprints can be traced not only in the business world but also in the community as well.

Her father, Kueh Kim Yong, opened a bicycle shop named Kim Yong at Main Bazaar back in the 1950s, where she had grown up. Even though she has already moved away from Old Bazaar for more than 40 years, it was just like yesterday when she began talking about her childhood memories.

She is 70 years old this year and was actually not born here at Old Bazaar. Before the age of five, she lived in other areas such as Padungan and Petanak, and it was not until 1955 when her father opened the shop at Main Bazaar.

At five years old, she loved going to Chung Hua Primary School No. 2 located in the Hainanese Association at Carpenter Street. She would hide outside the classrooms and peek into the lessons. She no longer remembers the lessons, but this was one of her most vivid childhood memories. Laughingly, she recounted how she would get lost during these escapades, only to be found by her grandmother who would scold her loudly in Heng Hwa. In the end, when she finally recognized the return route, the adults would still chase her away as they were concerned that she would disturb the students’ learning.

Finally, it was her turn to attend primary school after peeking into the lessons for so long. In 1958, she was a new student in Chung Hua Primary school No. 1. For some unknown reason, her father had not registered her for Chung Hua Primary School No. 2 which was just right down the street. Her most vivid primary school memory was when she attempted to find her way home from school after waiting for her father’s car for way too long. She burst into tears when she could not figure out the way! However, after that, she would walk to and fro school every day.

There Was Even Someone Sleeping Under The Bed

In her memory, there was never a quiet moment in those shophouse days. While they ran their business at the ground floor, the family lived in the first floor while the top floor was rented out for less than a hundred dollars a month. At its peak, there was an uncountable number of people living on the first floor. Her two uncles and their families took up two bedrooms, while her family of eight squeezed into one room, and some had to even sleep under the bed.

During the most unbelievable stage, there would be people sleeping in the living room, kitchen, dining room, and some even slept on the dining table and UNDER the dining table. However, despite a large number of family members squeezed into one level, they continued to rent out the top-level instead of living in it themselves.

A picture from the 1960s. This is a picture of one of their tenants, whose family name was Chua. She does not remember their names but would like to find them or their descendants in order to return this picture to them.

At that time, there was only one bathroom in the entire shophouse, and it was located at the ground floor. Therefore, the spittoon was a very important necessity for that era. Another memory that is closely associated with this bathroom would be the 36-door night soil trucks that settled their hygiene issues.

Before primary school, they would chop down crates to light up fire for cooking purposes. After that, they used petrichor before finally moving to gas tanks. Her father would finish work only after the firing of the 8 pm cannon. Sometimes, customers would appear at his door just to change a lightbulb right when he was about to close the door. However, her father would still take up the job even for a tiny profit. At about 9 pm, her grandmother would hurry the children to bed in order to save on electricity bills.

Kueh Geok Boi’s mother, Ong Chun Ah Moi, was a child bride. Despite being illiterate, she was an excellent homemaker. Not only did she have to take care of her children and all the cooking, she even took up a part-time job to sew coollie uniforms where she earned about 1 cent for each pair of pants. As the eldest daughter, Kueh Geok Boi was her mother’s trusty assistant since she was in Primary 6, where she learned how to cook and to deliver the completed pants to the shop. Her grandmother used to grumble that girls should not be going out and should be at home helping out instead. In her memory, her strict grandmother was always dressed in a traditional blue outfit sitting at the entrance watching the shop.

Her mother loved watching shows. Back then, their main entertainment was to go to Hong San Si temple to watch Chinese opera. When they grew older, her mother would bring all the children to the cinema for movies. Therefore, she watched many Shaw Brothers’ movies when she was young.

Back in those days, the Sarawak River lay right in front of the Main Bazaar. Her uncle and his friends would conduct cockfighting matches at the sandy river bank. One of the most vivid memories that she has is of a burning ship. In the 1960s, the Old Bazaar residents burned a huge paper ship at that riverside. The adults forbade the children from going near the site, so she looked at it through the shophouse window. The residents placed the offerings in the boat, and placed some offerings by the riverside as well. After that, the boat was pushed to the river to be burnt. It was an elaborate ceremony and she had never seen a similar ceremony again. Alas, she was too young back then and until today, she has no idea what ritual that was.

1964 in the Seng Ong Kong parade. This was the float by the Heng Hwa Association, and here she is seated in the float.

When she was in primary school, a senior came to her house purportedly to help her with her homework. However, when it was 7 pm, she would switch on the radio to the China radio station which played propaganda songs. When her father heard it from downstairs, he would scold them angrily.

After graduating from primary school, she went to the then Kuching High School, before transferring to Deshon Secondary School for Form 4. She left school after about six months and began working at Chin Lian Loong Transport. She remembers leaving home at about 8 am every morning and hopping into the Chin Lian Loong bus to work.

She began working at Chin Lian Loong in 1968.

Her wedding in 1977. ‘Tua Bak Jiu’, Huang Zhang Jinfa’s sister held the traditional sugarcanes, while Long’s wife played the role of the matchmaker. The bridal car was borrowed from Song Thian Cheok which had the auspicious license plate of 8444.

She got married in 1977 and no longer lived at Old Bazaar. However, she has never truly left this street. Later, her eldest daughter’s childhood was also written within the walls of this Old Bazaar shophouse. However, that is another childhood story for another era.

The child in the picture is Kueh Geok Boi’s eldest daughter, Lau Shuhua. She grew up at the Old Bazaar as well, and only left after graduating from primary school. 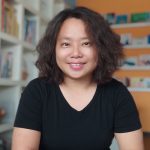 Bachelor of Mass Communication (Hons), used to be a journalist and feature writer, love reading, books, and old stories.