Mural Art – The Big Well and the Coolie Keng 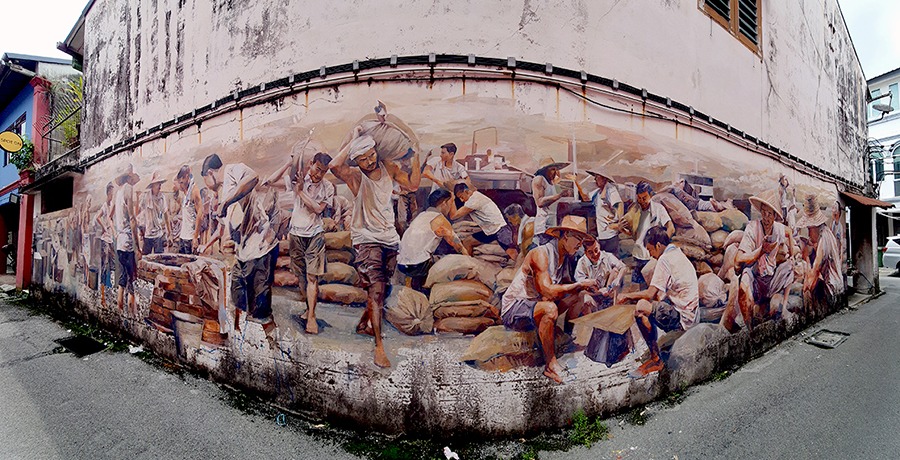 In the late 19th century, there were trading ships that sailed between Kuching and Singapore. From the 1920s onwards, there were huge government and private warehouses built at the Sarawak Riverside, which is a testament to the extremely busy harbour.  A group of workers with dark, suntanned complexions worked hard carrying heavy cargo on their backs every single day, from the ships to the warehouses and back. They were called coolies, which originated from the Chinese words ‘ku3 li4’ which means ‘hard labour’.

These workers were divided into many small groups which were each headed by a different leader. These groups were known as the ‘coolie keng’. Every day, groups of coolies would wait at the Old Bazaar for the ships to dock at the harbour, where they would fight for work opportunities. Most of them gathered at Upper China Street and Bishopgate Street, where many of the shophouses became their resting and living spaces. Before the 1970s, numbers 51, 52, 61 and 62 of Upper China Street, together with 19 Bishopgate Street were the well-known coolie keng.

In order to mediate the conflicts between the coolies who often fought over jobs, the Kuching Wharf and Port Labourers’ Union was officially founded in 1948. Its earliest address was at 78 Wayang Street, until the union purchased 22 Carpenter Street in 1953, which remained their permanent address until today. While the harbour at Sarawak River eventually moved away, coolies slowly disappeared from the Old Bazaar, and have now been reduced to be part of our generational memory.