Kuching Old Bazaar – A tourist attraction in the making 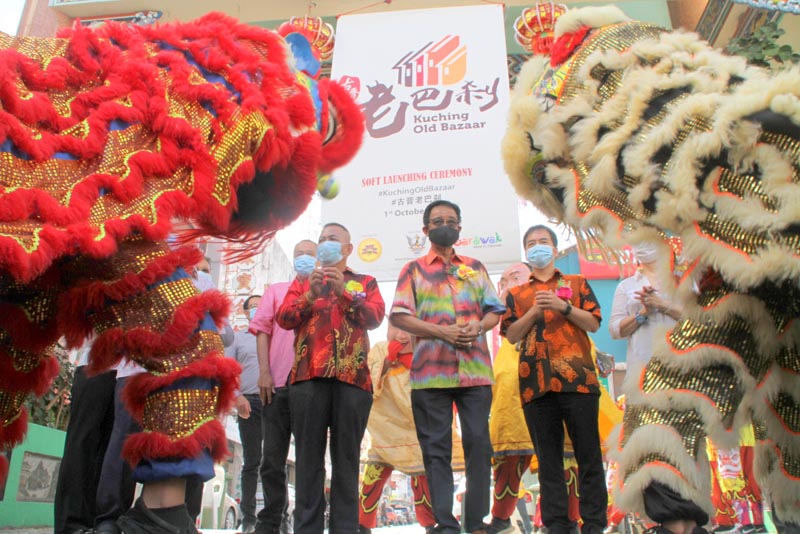 KUCHING: Efforts to rejuvenate the Kuching Old Bazaar here through a cultural mapping and tourism promotion programme will transform it into an excellent heritage tourism product.

Tourism, Arts and Culture Minister Datuk Abdul Karim Rahman Hamzah said the idea was first mooted and presented to the ministry by the Kuching Old Market Community Association (Komca) in April last year, where they exchanged views on conservation and heritage tourism of Kuching Old Bazaar.

“After the soft-launching ceremony today, serious work starts and hopefully the outcome will be delivered in five months’ time where we will officially launch the Kuching Old Bazaar during Chap Goh Mei in February 2021,” he said.

The minister was officiating at the soft-launching of ‘Kuching Old Bazaar: Cultural Mapping and Tourism Promotion Programme’ held at Carpenter Street here today.

Kuching Old Bazaar, one of the first trading commercial centres in Sarawak, has more than 100 years of history.

There are around 200 traditional shop houses with Main Bazaar to the North, Jalan Tun Abang Haji Openg to the West, Jalan Green Hill to the East and St Mary School that marks the southern boundary.

Abdul Karim said one of the objectives of the proposed programme was cultural mapping whereby the implementing parties would conduct systematic compilation of intangible heritage such as recording the oral history from the residents and collecting historical written record and photos from over 100 years of history.

“This in-depth undertaking will involve current and past residents/business traders/trade and community associations in this area, as well as old newspaper and official record, dating back to the Brooke era.

“The study will be conducted in collaboration with well-known researchers, historians and universities in Sarawak,” he said.

He added that the programme would create a new image and branding for Kuching Old Bazaar and hoped it would be on par with Singapore’s Chinatown, Penang’s Georgetown and Melaka’s Jonker Walk.

Starting next year, he said, the ministry would highlight the three spectacular Goddess Parades from the two temples in the area – Hiang Thian Siang Ti Temple and Hong San Si Temple, as well as creating more annual heritage tourism events in addition to the annual Intercultural Mooncake Festival such as heritage treasure hunts and ‘Old Bazaar on Sales’ campaign.