Facelift in the works for Kuching Old Bazaar, to be relaunched in 5 months 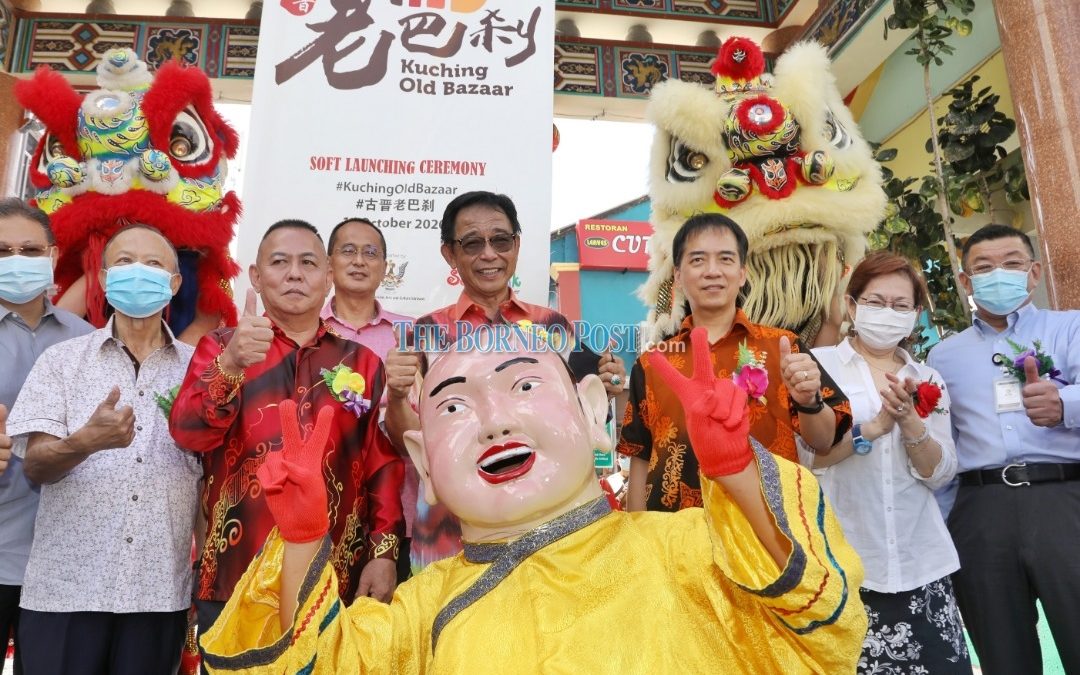 KUCHING (Oct 1): The Kuching Old Bazaar area will be revamped and relaunched in five months by February next year, in time for Chap Goh Meh, to attract tourists to the city centre, said Tourism, Arts and Culture Minister Datuk Abdul Karim Rahman Hamzah.

He said the area was selected as it is one of the first trading commercial centres in Sarawak, with over 100 years of history.

He revealed that within the Kuching Old Bazaar area, there are around 200 traditional shophouses with the Main Bazaar to the north, Jalan Tun Abang Haji Openg to the west, Jalan Green Hill to the east and St Mary School that marks the southern boundary.

“This is where the old Kuching was born and where the commercial centre was first started,” he told reporters after the Kuching Old Bazaar: Cultural Mapping and Tourism Promotion programme soft launching today.

He added that being in the center of old Kuching district, there were rapid changes in recent years with old traditional trades disappearing and many old residents slowly moving out from the area, and thus, there was a need to preserve and conserve tradition and heritage and at the same time rejuvenate the area.

He said his ministry plans to revamp the Kuching Old Bazaar to be on the same level with Singapore’s Chinatown, Penang’s George Town and Melaka’s Jonker Walk.

“After the soft launching ceremony today, the serious work begins and hopefully the outcome will be delivered in five months’ time where we will officially launch the Kuching Old Bazaar, by Chap Goh Meh in February 2021,” said Karim.

Karim said the cultural mapping will also be extended to Padungan, with old buildings there also constructed many decades ago.

Earlier, Karim said the comprehensive Kuching Old Bazaar: Cultural Mapping and Tourism Promotion programme was proposed by the Kuching Old Market Community Association. The association was formed in 1996 and its most notable achievement is the hosting of the Annual Intercultural Mooncake Festival.

“I am happy to see that the association has moved beyond the annual festival to come up with this brilliant idea and initiative.”

he programme include a systematic compilation of the Intangible Heritage by recording the oral history from the residents, as well as collecting historical written record and photos from over 100 years of history.

This in-depth undertaking will involve current and past residents; business traders, trade and community associations in this area; as well as old newspaper and official records, dating back to the Brooke era, Karim explained.

The study will be conducted in collaboration with well-known researchers, historians and universities in Sarawak.

“Using the information from the Cultural Mapping study, we aim to produce a series of promotion material including a historical booklet, four tourism brochures and five promotional videos, which will be promoted through the Kuching Old Bazaar website and social media platforms as well as Street Arts presentation,” he said.

There were also plans to create more annual heritage tourism events in addition to the Annual Intercultural Mooncake Festival. Starting from next year, the ministry aims to highlight the three spectacular Goddess Parades from the two temples of this area, namely Hiang Thian Siang Ti Temple and Hong San Si Temple, he said.